This is another one of those challenges I could test my Active Directory skills that I honed during OSEP. It was a tough challenge, and what made it tougher was the unusual way you get to the initial creds.

The room is called Crocc Crew, and is available at https://tryhackme.com/room/crocccrew.

The first thing I did was a portscan:

We clearly have what looks like a domain controller here.

As per normal, we see port 80 open, and we immediately start throwing wordlists at it.

The first interesting thing we notice is a robots.txt file. 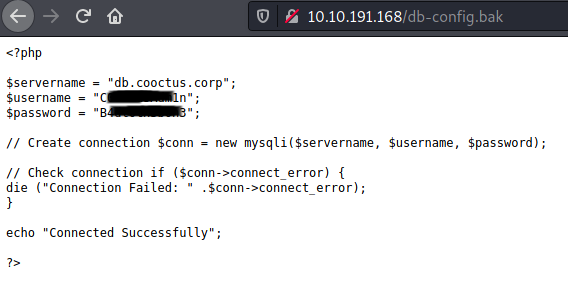 Wow, that was easy. We already have creds and the fuzzing is still running.

And this is where the hour long rabbit hole started.

I tried through crackmapexec at it, and it didn’t want to accept the credentials.

This led me to believe there might be other virtual hosts running here, and I kept throwing things at it. Nothing yielded results.

In the meantime the fuzzing didn’t turn up anything else, but a dead-end backdoor.php.

So what do we do when we get stuck? Try Harder… and enumerate more!

The only thing I could get that showed anything interesting, were rpcdump.py and tcp_dcerpc_auditor. 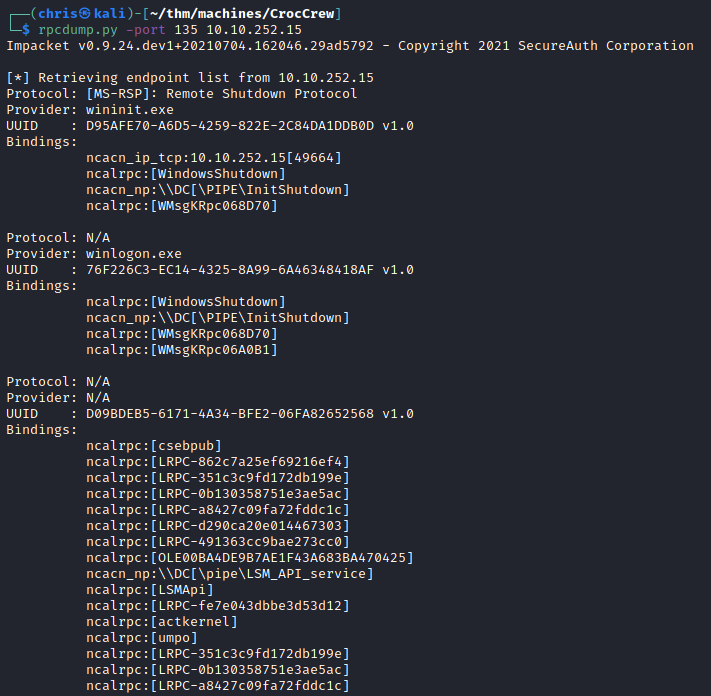 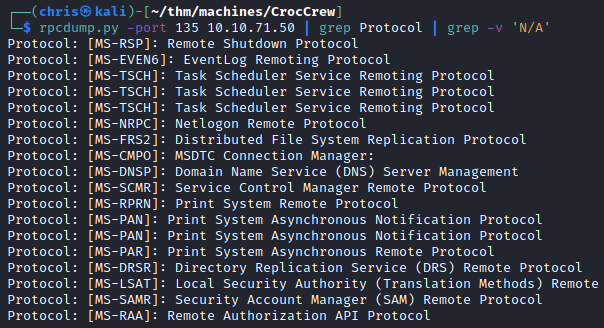 The above output seemed promising, because I was at least getting something to work with.

Another few hours were wasted in this rabbit hole. The plus side is that I think I know RPC a little better now. I might have missed something here, and am looking forward to seeing other people’s solutions.

Also tried to see if I can pick up a IPv6 IP address.

I decided to through a wordlist are kerbrute, and see what interesting users I get. 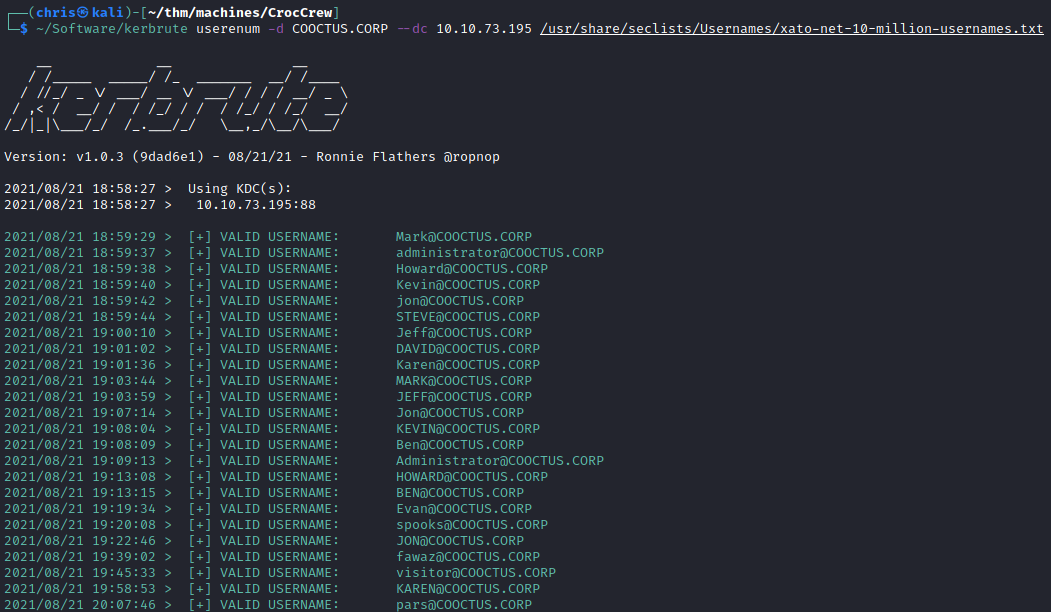 After getting a valid user list, I already tried running it through crackmapexec with the password obtained from the earlier found db credentials. Nothing worked.

I turned my attention to RDP. I know rdesktop spits out some useful info while the connection is trying to establish, but besides a hostname which I already had, there wasn’t much.

I finally had a breakthrough, after giving up the night before, when I logged back into RDP. I think it happened by fluke, because I typed in the params wrong for rdesktop. It gave me an idea, and eventually I was presented with the following. 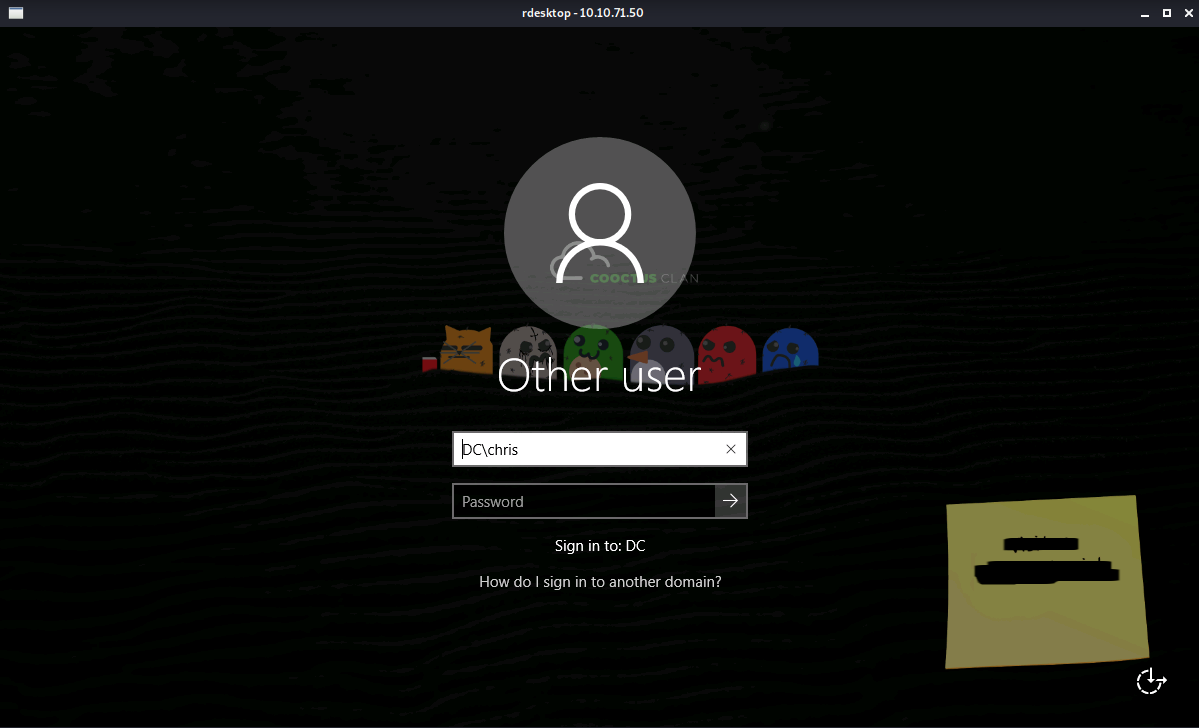 I recognised what looked like a username on the stickynote from my earlier enumeration. Immediately trying it using crackmapexec I had finally gotten somewhere.

Using the found credentials, I circled back to doing all my initial enumeration again. But before that I logged into SMB to at least get my first flag.

Using enum4linux-ng I was able to get more users. A trimmed down version is below.

I turned my attention to ldapdomaindump, and was able to immediately spot something that looked familiar from my OSEP learning.

We had a user with TRUSTED_TO_AUTH_FOR_DELEGATION.

During the course we almost exclusively made use of Rubeus, and I decided to take this time to learn how to accomplish all this from my Kali box, using impacket.

It took me a while of trying different things, at failing at it, until I finally figured out what was going wrong. I needed the correct SPN.

Making use of pywerview I got this user’s details. 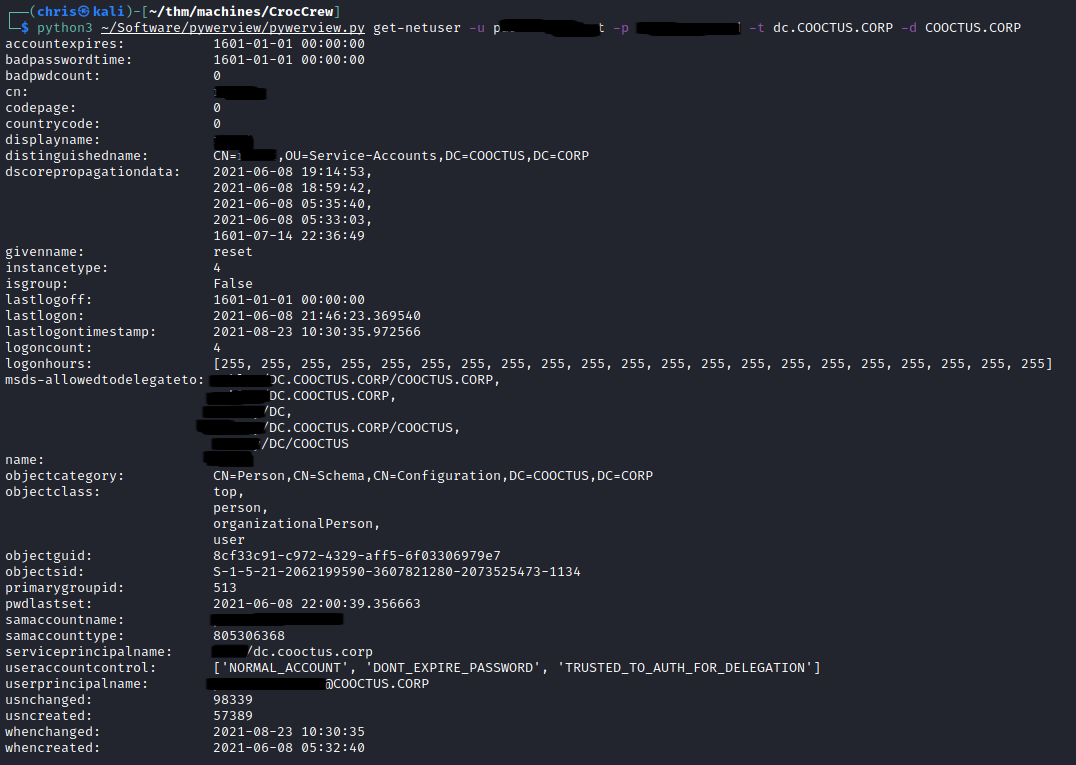 Knowing what the SPN was, I as able to create a ticket that impersonates Administrator.

Using this ticket, I was able to dump hashes from the DC.

I immediately used the Administrator’s hash, and was able to get code execution.

Making use of the web_delivery module in msfconsole, I was able to get a meterpreter shell.

I had gotten so tied up in getting the ticketing working, and doing privilege escalation, I had forgotten about the flags.

Once I was Administrator though, I was able to get all the flags.

This felt like cheating though… so I am sure there was a more intended way. 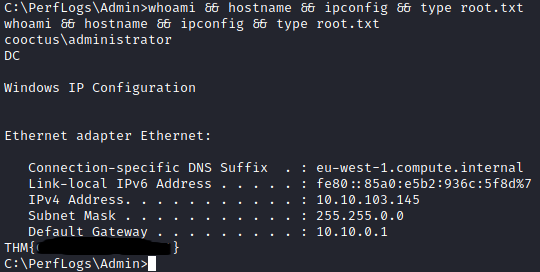