I recently had to perform a penetration test for a company that wanted to make sure the software being used for marking exams was secure. The software was running off the Dell Wyse 5010 thin clients, accessing a web application hosted on a Windows server. 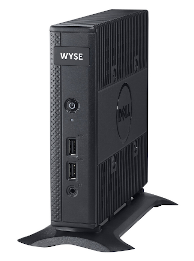 There were no items in the Start Menu, I couldn’t open Task Manager, and a number of other actions were also locked down.

The first thing I was able to do to obtain control of the thin client, was a simple “Right Click” on the Desktop, and “Create Shortcut”. This allowed me to create a shortcut to cmd.exe and to powershell.exe.

I was able to open both cmd.exe and powershell.exe terminals. Even though I had access to the menu option “Run as Administrator”, it did nothing for my privileges when it loaded the terminal.

Powershell was also only version 1.

I could now access and browse files on the thin client, even though when you open explorer.exe you cannot browse any files.

To my surprise, there was no anti-virus installed on this thin client.

I had physical access to the device, so I could plug in a USB drive with any tools I wanted to run.

My first thought was just to run winPEAS on it for some easy wins. Unfortunately, because this is such an old version of Windows, winPEAS kept crashing.

Powershell scripts also were blocked from loading, so I couldn’t use any of the normal enumeration tools.

After searching a bit online, I found SharpUp. It’s basically the c-sharp version of PowerUp.ps1. I compiled it, and ran it.

It identified two services that I could exploit. The first being SNMP, one of the standard Windows services, and another was HAgent, which is the service used by Dell Wyse Device Manager that is installed on the thin clients.

To exploit this service, I was able to modify the C:\Program Files\WDM\HAgent.exe file. I created a simple console application in c-sharp that would just add a local user, and add them into the administrators group.

I copied it over, and restarted the thin client. Once I was logged back in, the file executed and added my new local administrator user.

I changed the ImagePath in HKLM:\System\CurrentControlSet\Services\SNMP and used the following payloads:

Each time I modified the settings, I had to restart the thin client so that the service would also restart to execute my payload.

Why all this trouble?

This opened an attack opportunity:

Will this work on other Wyse 5010 Thin Clients?

My understanding was that the thin clients I was working with, contained the standard factory installation as they come. It’s worth noting that I have do not have access to these devices outside of this engagement and it’s quite possible that the vulnerabilities were introduced by the IT department themselves.